Red Wing Park is one of my favorite places to visit when I crave a short walk. Or when I’m in the mood for butterflies. Yesterday, I discovered several new attractions, including lotus blooms in an artificial pond and a skink basking on the pond’s rock border.

Butterflies were out in droves, even a few species I have never seen before. (Add these to the Snowberry Clearwing Moths in yesterday’s post…)

I caught several images of a large, unfamiliar swallowtail. I can’t tell if these are Pipevine Swallowtails or Spicebush Swallowtails. Maybe both species were present? Any ideas? 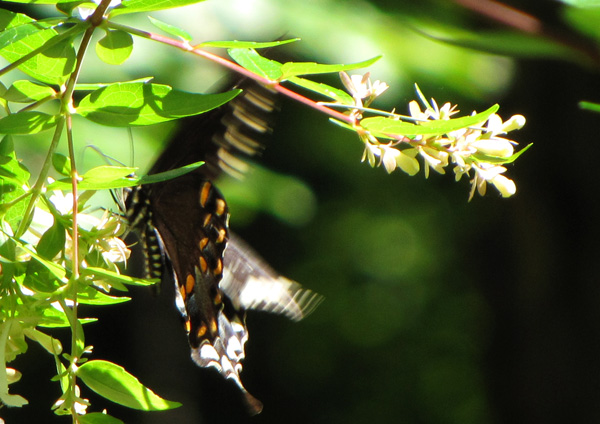 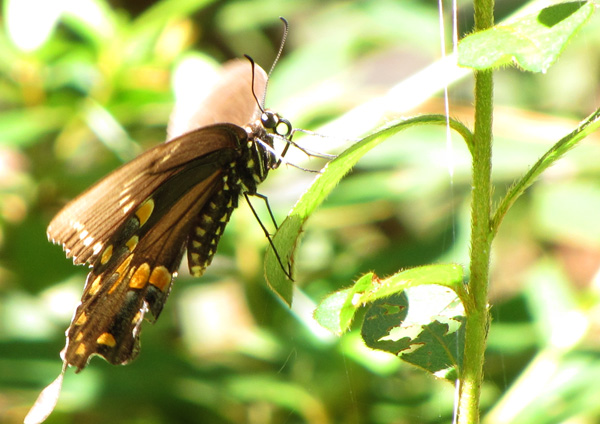 One individual had a mangled hindwing, with more than half of the wing amputated. In marked contrast to the other butterflies, this one struggled in flight. It flailed and fluttered along in short spurts, stopping to perch on flowers rather than hovering as it drank. It continued to feed and flirt with its companions, but it was decidedly less agile.

As far as wing injuries go, this was as bad as I’ve seen. I felt an uncomfortable surge of empathy, and I couldn’t help but wonder if the wound was painful. The encounter has turned me philosophical.

It’s just a butterfly. An insect. An ephemeral creature, at best. And yet, its fate affected me. I am reminded of that jaded cliche about chaos theory, the one where a butterfly flaps its wings in one part of the world, causing an alteration in the weather pattern of another part of the world. What of this butterfly’s damaged wing? What currents of change might eddy in its wake? 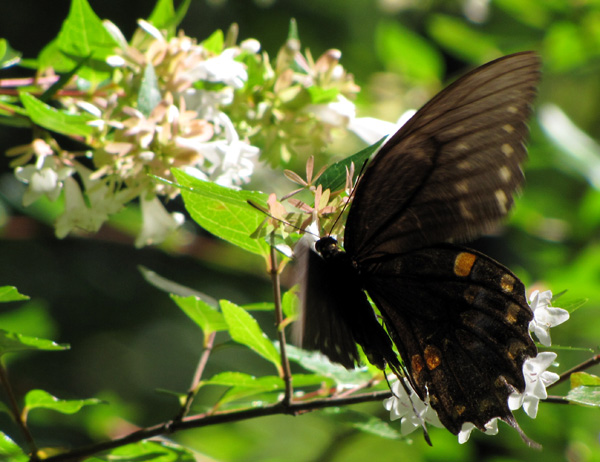 Publication note:  My poem “The Road” was published at vox poetica this week. It is now posted on the poemblog. Many thanks to editor Annmarie Lockhart!