In 2012, brain studies made headlines with evidence that metaphors activate sensory regions of the brain. The implications for fiction writers are readily obvious. If you want your readers to see, hear, smell, and feel your world, you can help them along by using descriptive metaphors. Articles like “The Neuroscience of Your Brain on Fiction” from the New York Times cover the topic in eloquent detail:

The brain, it seems, does not make much of a distinction between reading about an experience and encountering it in real life; in each case, the same neurological regions are stimulated. Keith Oatley, an emeritus professor of cognitive psychology at the University of Toronto (and a published novelist), has proposed that reading produces a vivid simulation of reality, one that “runs on minds of readers just as computer simulations run on computers.” Fiction — with its redolent details, imaginative metaphors and attentive descriptions of people and their actions — offers an especially rich replica. Indeed, in one respect novels go beyond simulating reality to give readers an experience unavailable off the page: the opportunity to enter fully into other people’s thoughts and feelings. (1)

The New York Times article references, in part, research done at Emory University in Georgia. The university’s website describes the methods employed in one of the more prominently discussed studies:

Seven college students who volunteered for the study were asked to listen to sentences containing textural metaphors as well as sentences that were matched for meaning and structure, and to press a button as soon as they understood each sentence. Blood flow in their brains was monitored by functional magnetic resonance imaging. On average, response to a sentence containing a metaphor took slightly longer (0.84 vs 0.63 seconds). (2)

For me, that last detail adds a new dimension to the discussion about metaphor in writing. Metaphors take longer to process. And, while the time lag may not seem significant when applied to single sentences, it adds up over the course of a book. Even over the course of a paragraph.

Here’s the first paragraph of The Last Unicorn:

The unicorn lived in a lilac wood, and she lived all alone. She was very old, though she did not know it, and she was no longer the careless color of sea foam, but rather the color of snow falling on a moonlit night. But her eyes were still clear and unwearied, and she still moved like a shadow on the sea. (3)

A lilac wood? Is the wood made entirely of lilacs? Is it purple? Maybe it smells like lilacs? Perhaps the intent goes deeper than description. Lilacs appear in mythology, flower lore, and in a well-known poem by Walt Whitman. Since there is no rule limiting each word in a text to a single meaning, lilac may mean all of these things. And, no matter which meanings I choose, I am alert for the next metaphors — a series of sea and water images used to describe the unicorn. These make me thirsty for more.

By the time I finish this first paragraph, the book’s opening pace is established. It flows from page to page in unhurried leisure, giving me plenty of time to explore and enjoy the scenery. At the bottom of the first page I’m told, “Unicorns are immortal.” And I understand. They have no need to hurry.

But things change for the unicorn, and for me, on page six.

From that first moment of doubt, there was no peace for her; from the time she first imagined leaving her forest, she could not stand in one place without wanting to be somewhere else. She trotted up and down beside her pool, restless and unhappy. Unicorns are not meant to make choices. She said no, and yes, and no again, day and night, and for the first time she began to feel the minutes crawling over her like worms. (4)

As the unicorn frets, so does the text. The first part hurries along, a straightforward description of restless indecision. Then time slows uncomfortably with “… minutes crawling over her like worms.” Further down the page, I find this paragraph:

Under the moon, the road that ran from the edge of her forest gleamed like water, but when she stepped out onto it, away from the trees, she felt how hard it was, and how long. She almost turned back then; but instead she took a deep breath of the woods air that still drifted to her, and held it in her mouth like a flower, as long as she could. (5)

The road “gleamed like water.” It’s an arresting image, recalling the first paragraph’s water imagery. I expect the road to ripple when the unicorn steps on it, and I share her surprise at finding it solid. I’m ready for her deep breath, because I need one too, but then I am caught by the uniqueness of “…and held it in her mouth like a flower.” Like a lilac? It’s so captivating that I, too, pause as long as I can.

Comparing the two scenes from page six, the second is shorter than the first, and yet it holds more intricacy. I linger, savoring the shorter passage. The first scene is useful and informative. The second is a critical turn in the plot, and its metaphors force me to pay attention as I read.

But how do I apply lessons learned in The Last Unicorn to my own writing? I begin by planning my metaphors better, capitalizing on their ability to engage a reader’s senses, as well as their pace. Too little metaphor renders stories thin and featureless. Too much slows them to tedium. Where will metaphors enhance my stories, and where will they get in the way? 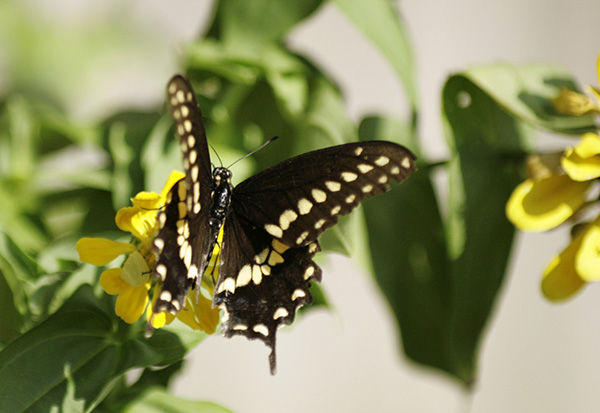 “Say my name, then,” the unicorn begged him. “If you know my name, tell it to me.”
“Rumpelstiltskin,” the butterfly answered happily. (pg 10)

You know better than to expect a butterfly to know your name. All they know are songs and poetry, and anything else they hear. They mean well, but they can’t keep things straight. And why should they? They die so soon. (pg 11)