During a lull between snowstorms, we took a walk at Back Bay National Wildlife Refuge.

The beach was clear, but large sections of the bay were frozen, as were all of the ponds. Winter normally brings a few frosty nights to our area, but prolonged bouts of sub-freezing temperatures are rare. 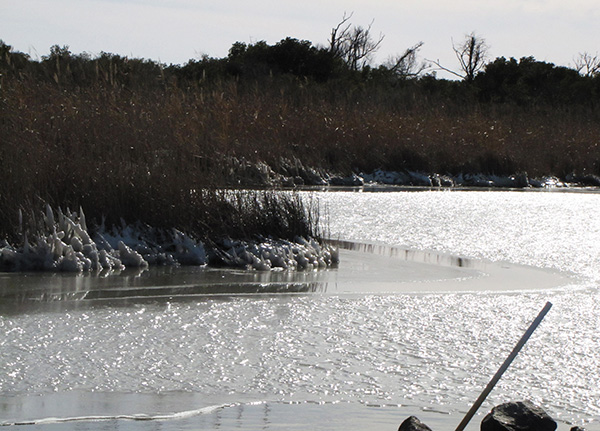 Most of the over-wintering birds had deserted the refuge, and the few that remained seemed confused.

Mallards were out, walking on the ice. Something about the way they moved — one careful step at a time, watching their feet, pausing here and there to probe the ice — reminded me of television detectives inspecting a crime scene.

Other flocks had given up and opted to sleep until the ice thawed.

With the refuge so quiet and still, every sound and movement drew my attention. On a normal day I would have missed the mockingbird on the parking lot fence and the small heron huddled near the road.

I doubt I would have missed the deer, though. Three of them edged nervously out of cover near the Visitor’s Station, crossed an open patch of lawn, and disappeared down one of the trails.

I wondered if the lingering snow had forced the deer to change their grazing pattern. Or maybe they wander through every day? Maybe snow, even rare twice-in-a-month snow, doesn’t affect deer the way it affects me. Maybe they don’t spend hours admiring the fresh fall, then more hours fretting over the slippery deck, half-frozen pipes, and cancelled appointments. Maybe they simply carry on, day after day, searching for nothing more complicated than grasses to eat, water to drink, and a warm, dry place to sleep.

As mentioned in a previous post, I recently spent two afternoons in a row at Back Bay National Wildlife Refuge. Both days the refuge was fully in the grip of fall, but the first day felt a few steps closer to winter than the second. (Doesn’t winter always feel closer on cloudy days?)

As I tried to organize my photos into pairs, I found the last set of images impossible to manage. On November 4th I took only one photo of the approaching sunset, but on November 5th I snapped frame after frame, hurrying from one vantage point to the next…

Why do I see beauty in such sunsets? Why do I stop and stare? Why does my breath slow and the noise of necessity fade to a distant murmur?

It is as if the sky stirs something in my memory, something nameless and ageless. Then the sky’s glimmer dies to darkness, and my lungs grow hungry again as the ancient spark inside me dwindles. It’s all so fleeting that, as soon as it’s over, I begin to doubt. Perhaps it was an illusion, or a delusion. Perhaps it was just another sunset, just the end of another November day…

This week I spent two afternoons at Back Bay National Wildlife Refuge. The first visit was cold and windy with heavy, low-hanging clouds. My photos from that day are grainy and blurred, including several photos of a rather large mammal crossing one of the many open areas of water.

At first I thought the creature was an otter. It was too big to be a muskrat, and the habitat was wrong for beaver.

But, what about the shape of its head? Doesn’t look like an otter’s head… 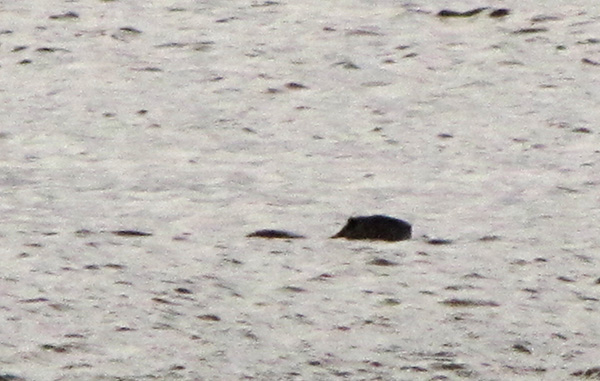 Which leaves me with nutria. (Please comment if you can correct or confirm my guess!)

I returned the next day, lured by warmer temperatures, clearing skies, and continuing curiosity. The animal wasn’t there when I arrived, so I walked the other trails for a few hours and circled back at sunset for one more try. By then the light was even worse than the previous day, so I almost missed the familiar form. Forms, because there were two.

I took a few photos, though I knew it was too dark for my camera’s lens, and I was on the point of leaving (the refuge closes at dusk) when smaller versions of my mystery mammals appeared. 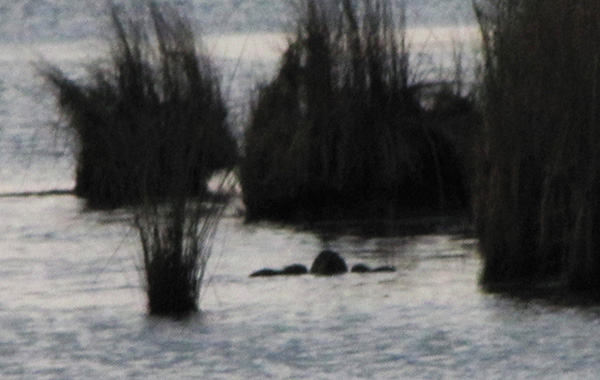 The waning light defeated my camera, so all I have to share are shadows and silhouettes. My photos don’t show how the young animals played in the water, how they chased each other in widening ripples. How they ventured into open water, then hurried back to the safety of their parents.

I watched, enthralled, until the sun’s light disappeared completely. The scene was charming. Baby animals are always charming.

Except, in the case of nutria, charm quickly fades.

I have mixed feelings about eradication programs aimed at invasive species. Nutria undoubtedly wreak havoc on marsh ecosystems, but what are the chances they can be eradicated permanently? And what is the cost? The bottom line is that all ecosystems change. Coastal ecosystems, in particular, are under immense pressure. Can we hold back the tide? Should we? I’m not proposing that we do nothing, but I suspect eradication is not a sustainable goal.

This American Bittern was uncharacteristically exposed when I first saw it, and it seemed a bit embarrassed to be caught in the open. It froze for a few minutes, which made my camera very happy, then began to creep toward cover.

After a few steps, it paused behind a thin screen of vegetation and practically disappeared. If I hadn’t seen it in the open first, I never would have seen it at all. 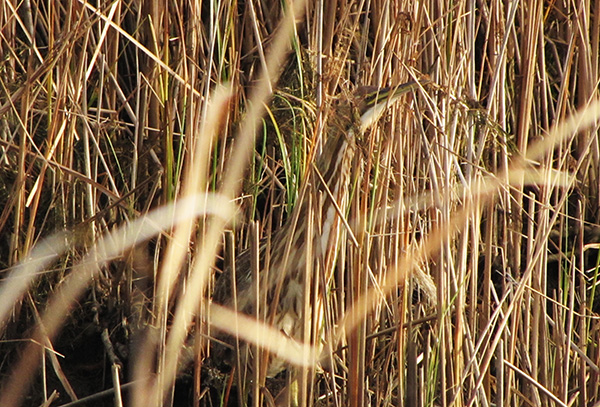 The bittern reminded me how hard it is to see the world. Every day I encounter remarkable, beautiful things, and all too often I fail to see them. 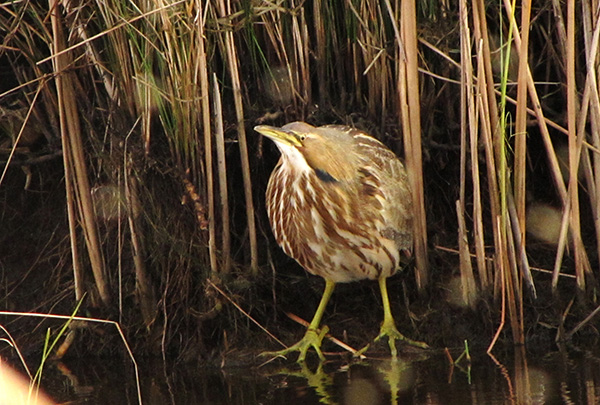 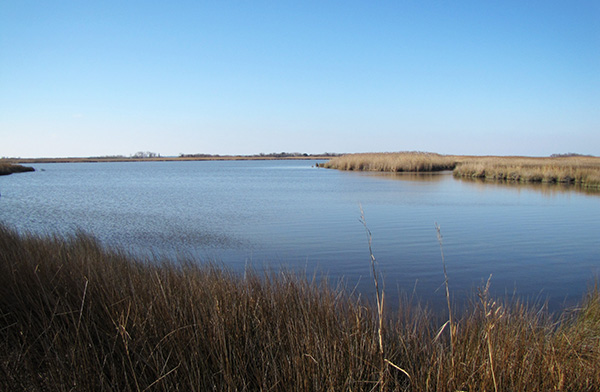 A final set of photos from Wednesday’s walk at Back Bay National Wildlife Refuge, which is one of the most beautiful places I’ve ever seen. 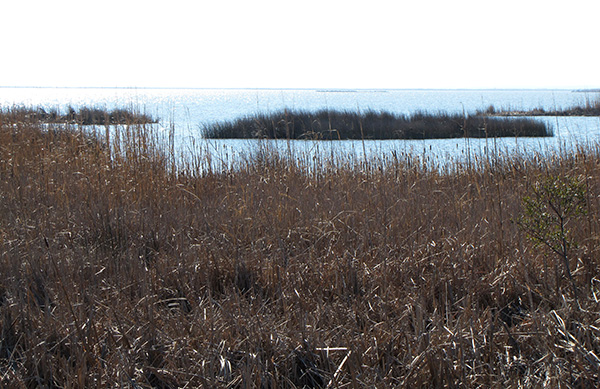 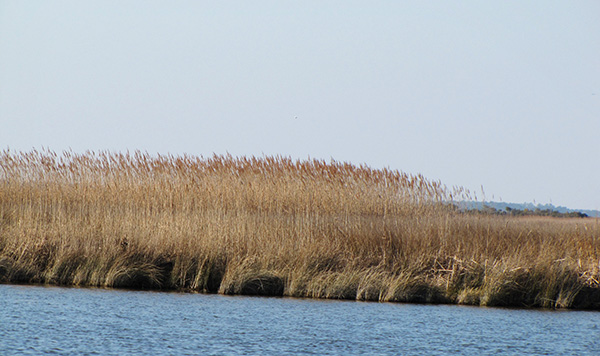 A rich variety of wildlife makes every visit a fascinating new adventure. 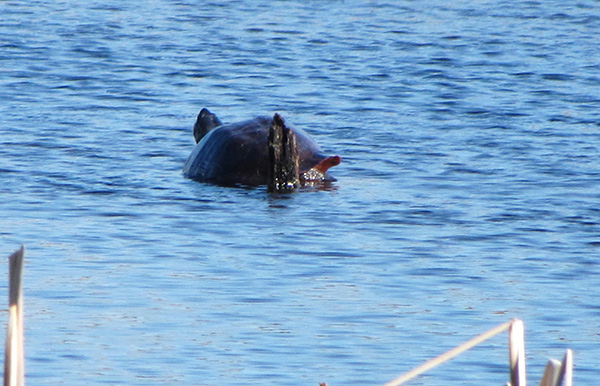 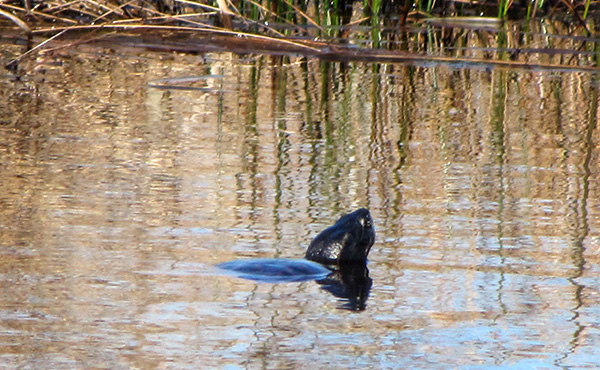 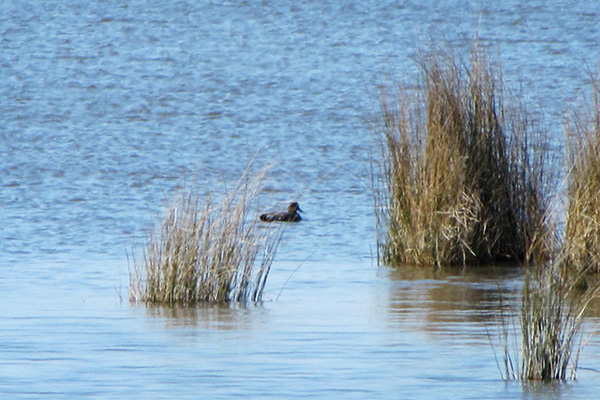 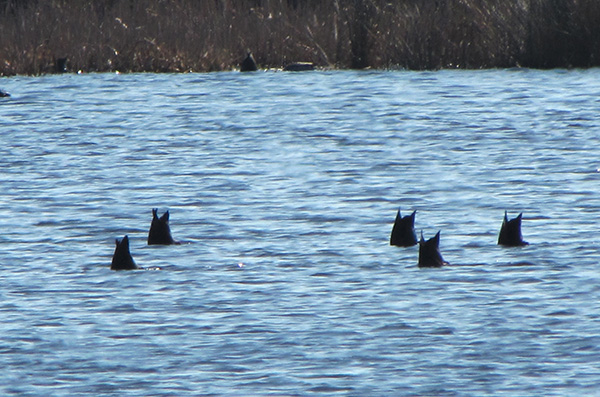 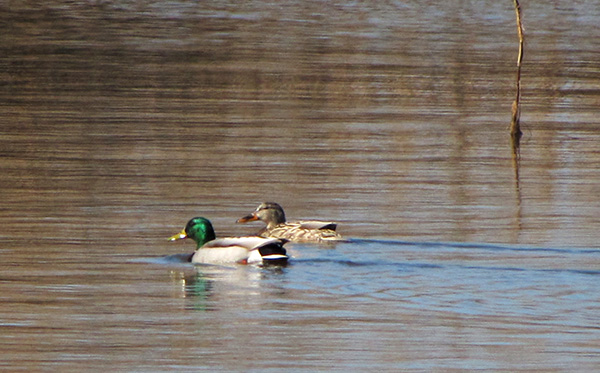 (The ducks pictured above are a new species for me, and I would love a little help identifying them. Are they Gadwalls?) 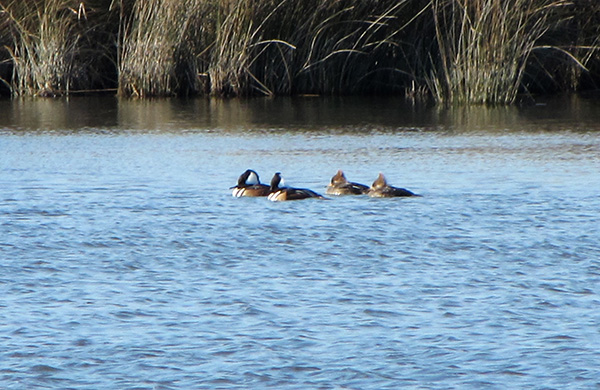 As much as I enjoyed taking these photos, I regret that I missed the deer.

And I’m aching to know who left the following tracks on a patch of sand near the trail.

There were two sets of tracks, side-by-side, moving in the same direction. The footprints were slightly smudged, but the tail-drag marks were clear enough. What do you think? Did I miss otters? Or are the tracks more lizard-like?

I can’t resist a mystery, and I would love to add deer photos to the archive. I’m already planning my next walk…