For me, “June bug” is synonymous with “summer”. I have vivid memories of a yard teeming with these large beetles, loud with the drone of their wings. There was a trick to catching them, a certain turn in their flight that signaled they were landing. Watch, watch, watch, then race across the yard to the spot where one had just disappeared into the grass. I remember the pinch and scratch of their legs and the sharp odor they left on my hands.

Here in Virginia, summer after summer has passed with no June bugs. Since leaving Tennessee, I’ve only seen one or two. Until this week. Seemingly out of nowhere, dozens of them have buzzed into the yard. It’s been a blissful dose of nostalgia, watching them come and go, listening to their heavy flight. I’m no longer interested in catching them, except with my camera, but I smell them on my skin again. Their unexpected arrival is a breezy memory that makes me yearn for another sprint through the sunlit yard of my youth.

It never occurred to me, before beginning this post, that what I know as a June bug might not be the same insect that everyone knows as a June bug. For clarification, when I say “June bug”, I actually mean green June beetle.

To further complicate matters, I photographed the next beetle on the same day, thinking it was simply a small individual of the same species. Turns out, this is probably an entirely different species, an Emerald Euphoria beetle. 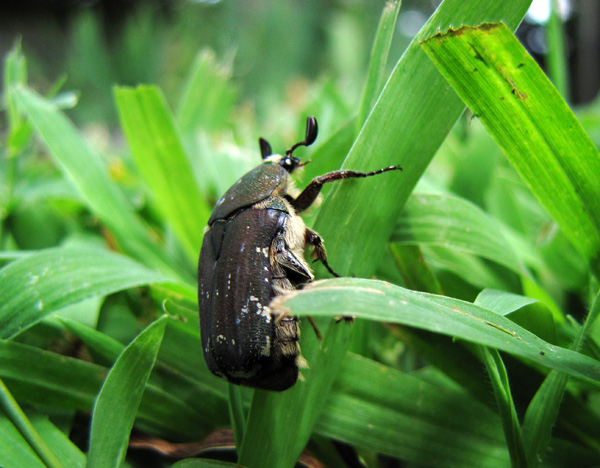 A few years ago, Mother called me after hearing a song on the radio called “Junebug Waltz”. She loved the song so much that she searched out the CD, It Don’t Mean I Don’t Love You by Hurray for the Riff Raff. I’m grateful to her for introducing me to the song, and the group.