I first saw this little skink while I was mowing today. I stopped long enough to take a picture, then continued on with the mower. Slowly, because I didn’t want to hit my pretty blue-tailed visitor if it decided to hide in the grass.

Later, I spotted the skink again as it basked on our driveway. I took several more photos, then lost track of my subject when it squeezed itself into a seam under the house’s siding. A few minutes passed before it scrambled across our porch and into the iris bed, carrying something in its mouth. I couldn’t tell what it had caught, but I was able to follow with my lens and snap a few photos as it ate. 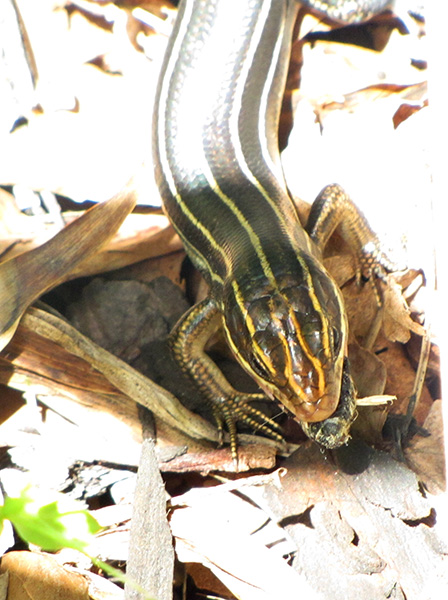 After gulping down its meal, the skink paused in a patch of sunlight before moving deeper into the irises. 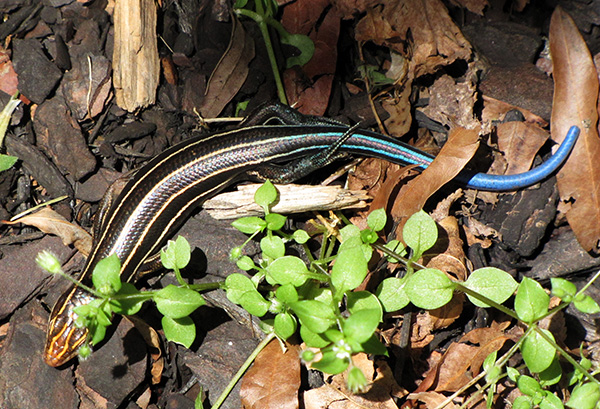 When I was young, Mother called these lizards “blue-tailed skinks.” I can’t remember exactly when we discovered that our blue-tailed lizards were actually juvenile skinks of three distinct species, and that their bright tails would fade as they matured, but I remember being shocked that Mother had been wrong about something. (Which means it must have been before the worst of my teenage arrogance set in, when I would have been shocked to discover that Mother had ever been right about anything.)

In trying to identify today’s photos, I decided this was a Broad-headed Skink based on the following close-ups, which show five scales on the upper lip between nostril and eye. (Click on the thumbnail at the bottom of this page on the Virginia Herpetological Society website for further explanation, and please comment if you can correct or confirm my identification!) 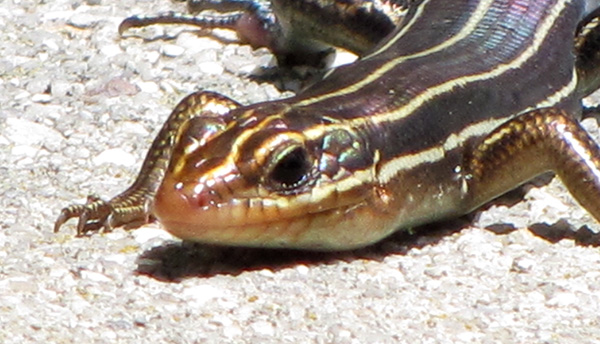