The house wren spent weeks perfecting his nest. He added twigs until no more twigs would fit, then filled the spaces between twigs with bits of spider web and grass clippings. As he worked, he sang.

Several female wrens visited during those weeks. They hopped around the yard, inspecting all of the nest boxes and gourds, scolding the male when he got too close. The male wren reacted to these visits with a barrage of high-pitched calls, fluttering from perch to perch as he tried to lead the females to “his” nest.

Finally, one of the females decided to stay. She finished the nest over a period of three or four days, spending longer and longer inside the nest box each day.

Then I woke one morning to a furious battle. A new wren had arrived, and all three birds were fighting. By mid-morning, the new wren had driven the nesting pair away and destroyed their eggs.

The new wren visited each of the gourds and nest boxes that day, adding twigs to all of them. More than once I saw him remove twigs from the old nest and carry them to one of his new nests. He seemed particularly fond of the gourds, which the other wren had largely ignored.

I suspect the first wren was a very young male. He put all of his efforts into one nest, while most sources indicate that male wrens typically build several nests at once. He also seemed thoroughly over-excited whenever a female appeared in the yard, smothering them with enthusiasm.

By comparison, the new wren is calm and sedate. His sings less, and his song is softer. He follows females, when they appear, but does not flutter and scold as they investigate his nests. This afternoon one of the females began adding material to the old nest, and he let her work in peace. He watched, singing occasionally, but stayed out of her way.

I’m fascinated by the new wren’s behavior, which seems like a paradox to me. He arrived in a whirl of aggression, complete with egg destruction, but his activity since has been passive. What triggered his initial invasion? And will he be able to hold the nest he won? 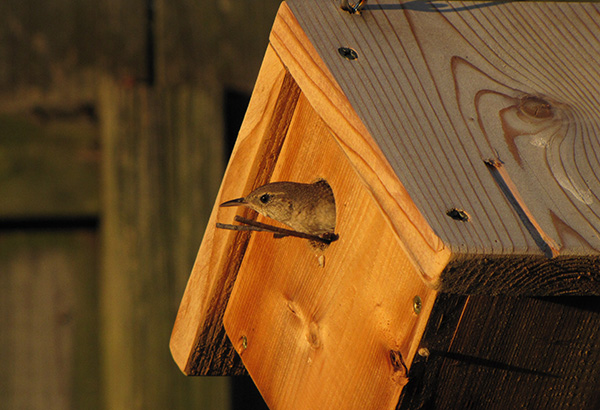