The yard is warm and sunny today, sprinkled with blossoming weeds. A few weeks ago it was frozen and snowy.

This year January and February saw days warm enough for house repairs (replacing wood damaged by carpenter bees), followed closely by days too cold for anything but reading and sleeping. 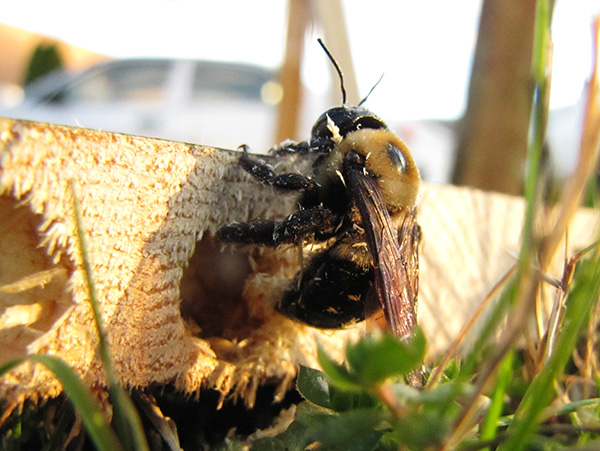 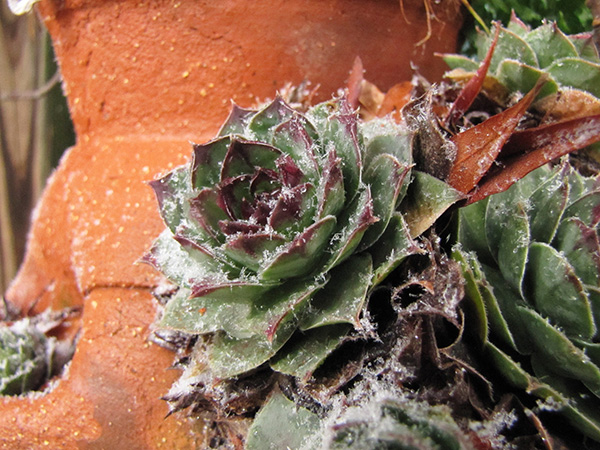 Some days were strangely confused, cold with bright sunshine or warm with dreary skies. 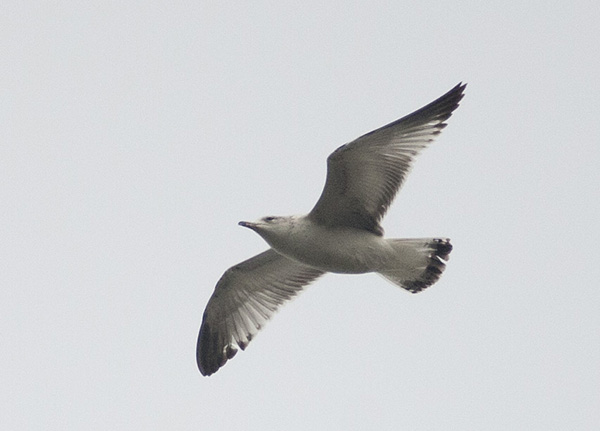 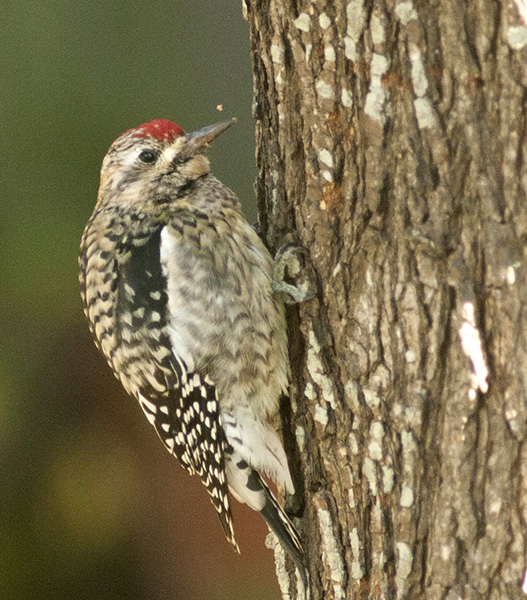 Our annual writers’ weekend at the beach brought a little bit of everything. 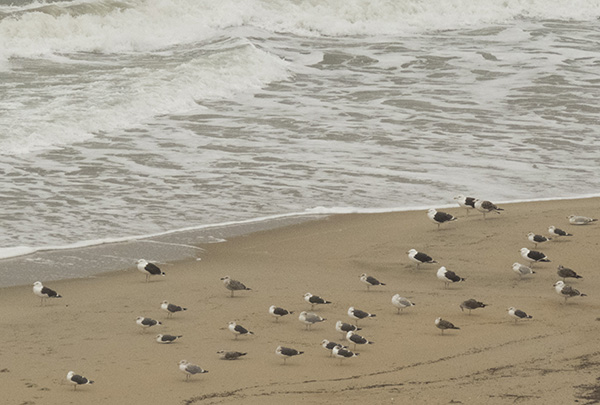 March will likely bring a little bit more of everything, but hopefully it won’t get fountain-freezing cold again.

Atlantic populations of Humpback Whales migrate past the Virginia coast each winter, but I’ve never been fortunate enough to see one of these marvelous animals. Until yesterday. 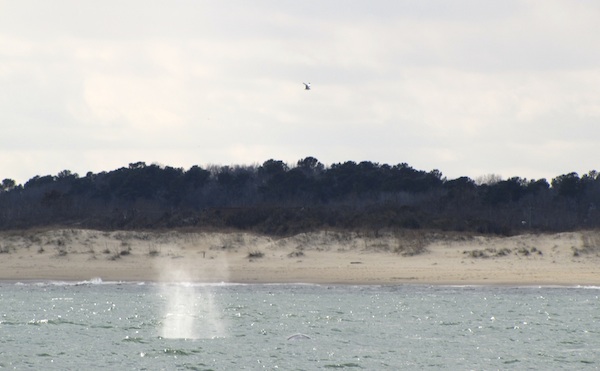 I’ve been promising myself a whale watching cruise for years, then finding excuses to put it off. Too expensive. Too cold. Too nervous around crowds and boats. Yesterday, a group of friends helped me overcome excuses and nerves.

We met at the Virginia Beach Fishing Center, where we boarded a boat for one of the Virginia Aquarium’s Winter Wildlife Boat Trips. 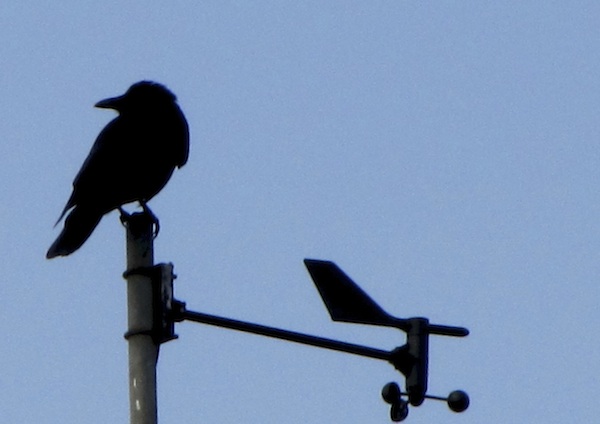 I don’t know how many whales we saw during our two hour boat ride. Maybe two, maybe six. Maybe more? 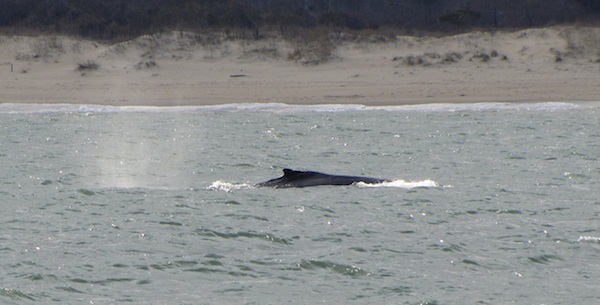 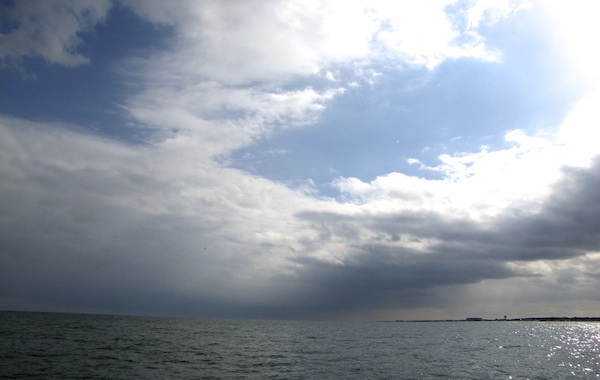 Once again, I find myself adrift in happiness. There are no words complex enough to express this joy, no photos real enough. There is only this middle-aged flesh and quickened breath, this tempest of unfocused inspiration. Some quiet day in the future there may be a poem, but for now there is only euphoria. 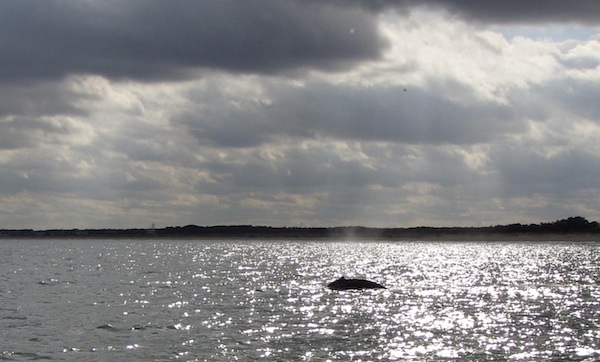 It snowed at the beach on Friday, just in time for my annual weekend with the writers. 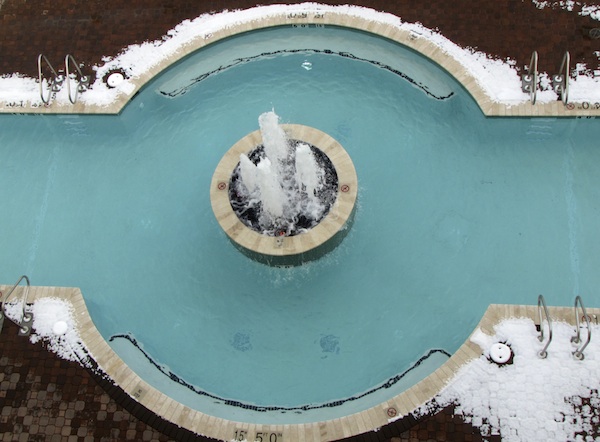 We stayed at a hotel on the Virginia Beach oceanfront, where we laughed and ate and sat around in our pajamas as we read to each other and critiqued chapters from works-in-progress.

All the while, it was so cold outside that Friday’s snow couldn’t melt.

Saturday afternoon I spent some time on our icy balcony, trying to photograph cormorants, seagulls, and dolphins. 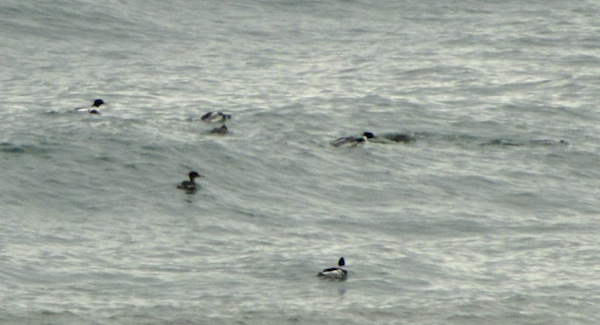 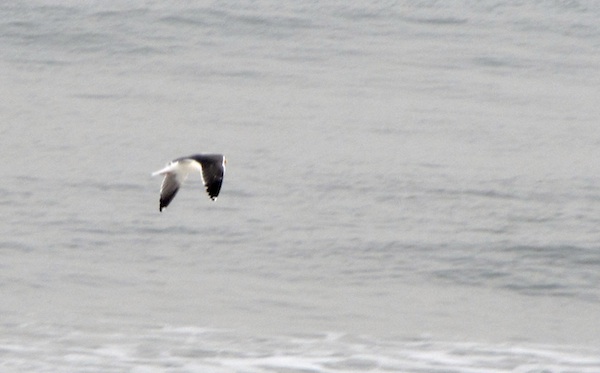 Clouds raveled and gathered again, the sun came and went, and the ocean flickered from gray to green to blue. 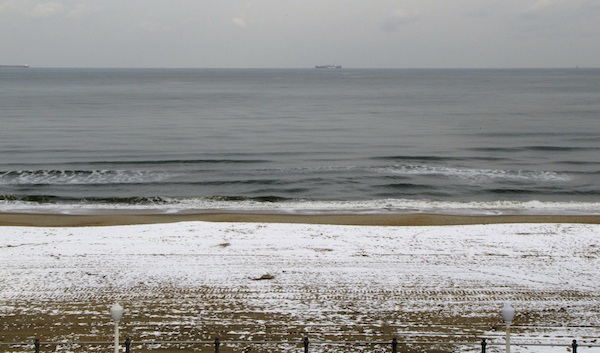 All day Saturday the surface looked silky and smooth, but Sunday morning’s high tide rumpled it into restless wrinkles. 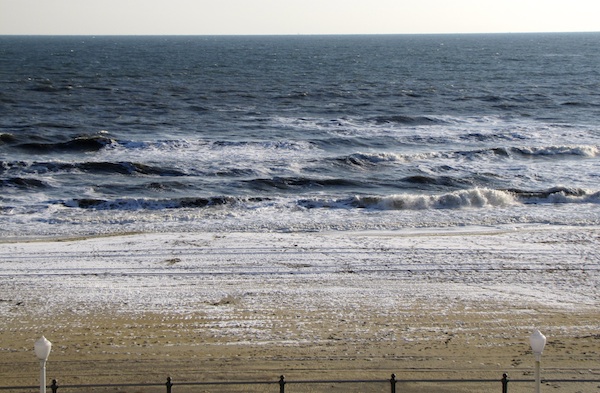 After I got home, I felt restless, too. Uncertain of how to proceed from here. The weekend was so perfect, and the house was so warm, and I was indescribably happy.

How could I ever want more than what I have right now? More than these comforts and luxuries I am so grateful to have known?

Yesterday, I flew home through the southern-most remnants of Hurricane Sandy. The flight was a bit bumpy, though not as rough as I had anticipated. I went to bed early and slept late this morning, then meant to spend much of my day in the yard, which is cluttered with knotweed and wind-torn leaves. But as I knelt in a patch of damp grass, acutely aware of the contrast between the yard’s October-cold ground and a breezy sky full of summer-warm sunshine, I changed plans. 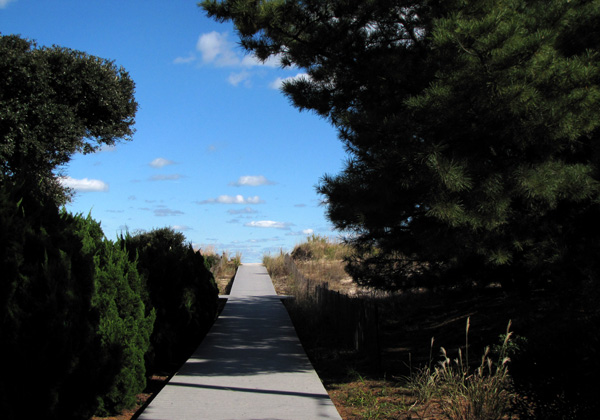 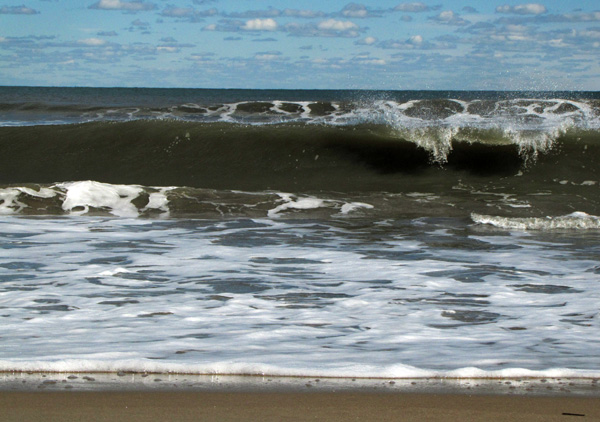 The ocean was restless, tossing sets of foaming waves onto a beach swept flat and clean. I watched as a ship pulled out of the Chesapeake Bay, and I hoped that it was headed north, carrying help to areas devastated by Sandy. 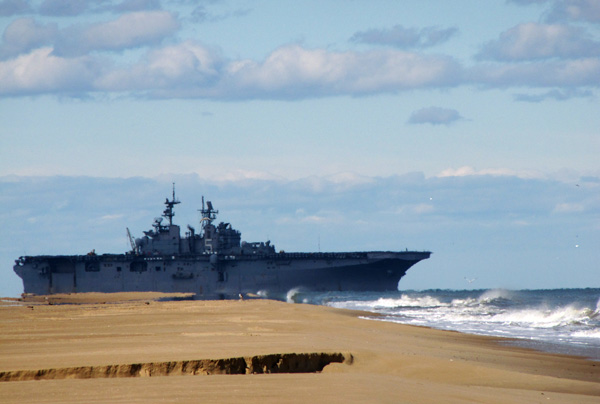 Trying to distract myself from overwhelming images of flooding and destruction, I spent the next half-hour photographing pelicans. 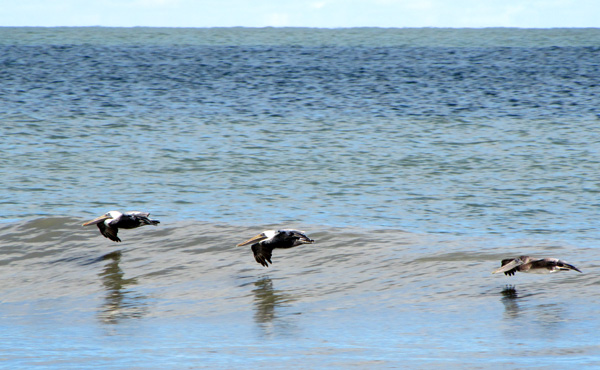 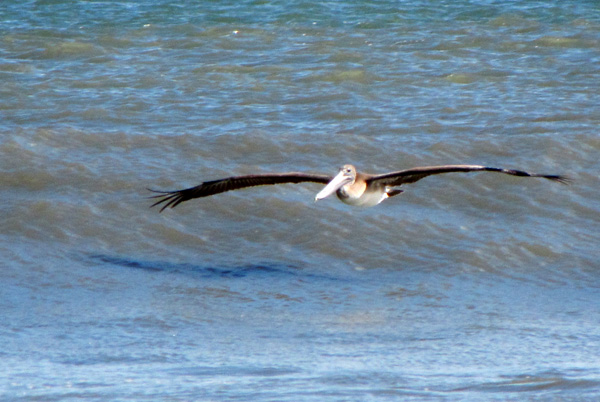 Eventually, my phone chimed an appointment reminder, which I barely heard over the ocean’s tumble and growl.

My route to the appointment carried me past First Landing State Park, so I stopped for a quick glance at the Chesapeake Bay. 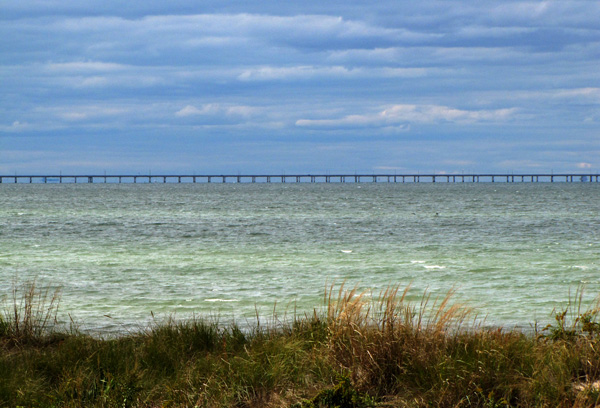 (That’s the Chesapeake Bay Bridge-Tunnel, in the background.)

I only stayed about fifteen minutes, and in that short time clouds swallowed the sun. I assumed these clouds were related to the storm, or to the cold front that fed its monstrous transformation into a super-storm. Either way, I returned to my car with a heavy heart, helplessly small and weak under such a beautiful, terrible sky.