At sunset, sphinx moths arrive for another feeding in the ginger lilies. They drain the flowers’ day-long accumulation of nectar, then move on. Around midnight, they return for the nectar that has been produced since nightfall.

I’ve seen a few different species of these hovering moths in the yard. The moth in the following photos is either a Carolina sphinx or a Five-spotted hawkmoth, but I can’t decide which. Any ideas? (Maybe it’s neither?)

The moth in this video is a Pink-spotted hawkmoth. 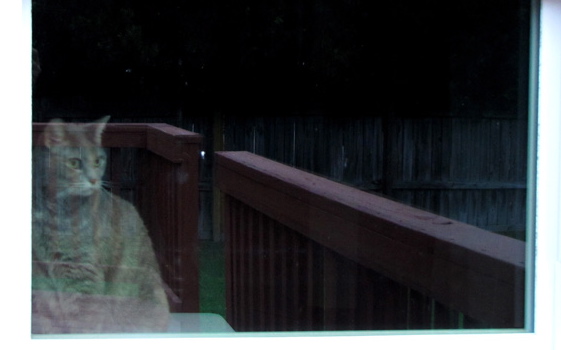 Yesterday evening started out calm and quiet, with little visible activity in the yard. Then my husband phoned from the driveway. He didn’t want to get out of his car because there was a hawk in the front yard, one that was having trouble subduing a rat. He didn’t want to frighten it away.

This area has a growing roof rat population. Our shed is constantly under siege. We clear nests as we find them, keep our birdseed in a sealed container in the garage, and never fill the feeders with more seed than the birds can eat in a day. Rats still invade the shed. Recently, one has left an unmistakable trail of new evidence. We’ve been considering a more aggressive policy for our rat, one that will involve traps, but it seems such drastic measures won’t be necessary. 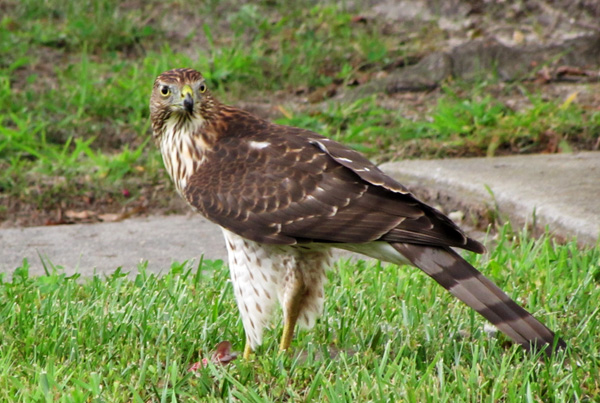 I believe this is a young Cooper’s Hawk. It eventually killed the rat, then carried its prize into the back yard.

We weren’t thrilled with the hawk’s decision to dine on our deck railing. Even so, we hope it will come back, the next time it craves a rat. (Just to be clear… that’s RAT. Not RABBIT.)

After the hawk left, a rabbit emerged from her hiding place under the deck and began digging a new nest. (The above photo was taken on August 16th. I believe it is the same rabbit.) I was skeptical of her efforts. I let myself get too excited, during construction of the last nest, which doubled my disappointment when the rabbit abandoned the site before finishing the nest.

Maybe this time? I didn’t want to watch too closely, so I turned my attention to the ginger lilies.

Each fall, I become obsessed with sphinx moths. This year the moths are a few weeks early, but as long as the ginger lilies keep blooming, the moths will keep coming. We typically see Pink-spotted hawkmoths, though the last few nights have brought mostly Carolina sphinx moths. My earlier photos were underexposed (except the one that was badly overexposed…), so I was happy to have another chance to practice with my camera’s flash. 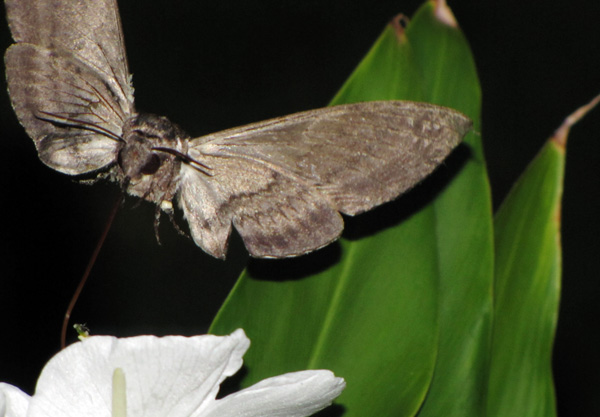 After it grew too dark to see moths, I checked the rabbit’s progress. She had completed the nest and was nowhere in sight. I feared it would be another false-start. Another abandoned nest. But a closer look showed several tufts of hair around the nest, which seemed a good sign. (In the final stage before birth, rabbits pluck their own fur for the nest’s innermost lining.) I was tempted to look inside the nest, but forced myself to leave everything untouched.

Can you see the nest? The disturbed area in the foreground is where she harvested grass to line the nest. The smaller spot is the actual nest.

This morning, I couldn’t resist the temptation to check for babies. Success! Inside the nest, the babies are snug in a water-tight pocket of hair, which is surrounded by a thick pocket of dry grass, which is all cleverly buried and nearly invisible. 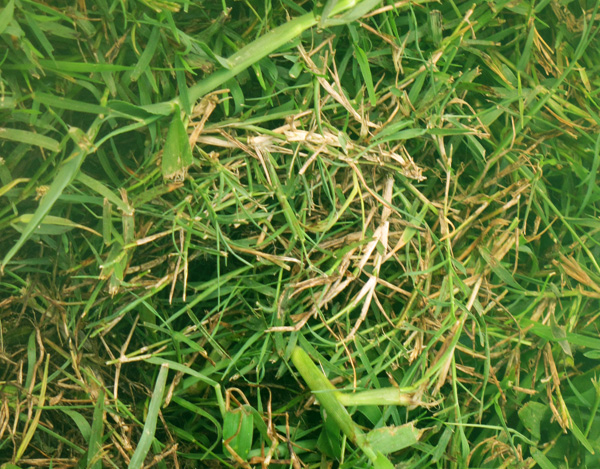 Now comes the hard part. As much as I want “our” rabbits to thrive, I know the odds are against them. The world is a dangerous place for baby rabbits. It teems with stray cats and hawks.

For that matter, the world is a dangerous place for all of us. Take away cats and hawks, and the world would be no safer. It would only be less beautiful.

At dusk, the ginger lilies’ powerful perfume fills the yard, drawing hawk moths and sphinx moths.  They arrive in the last moments of twilight, large shadows flitting silently among blooms that almost glow in the dark. The moths hover as they sip nectar with impressively long tongues.

Tonight’s visitors were mostly Carolina sphinx moths, a new species for the yard.